Rattle in the Ruins

While visiting Bulow Plantation Ruins, a Florida State Park  just south of Palm Coast, the ruins themselves were spectacular, brought the rugged mid-1800’s to life, and offered great material for picture taking.  One view of the ruins is shown below:

On the drive back to the park entrance, we discovered a resident that became the clear highlight of the trip.  As a sentinel guarding this ancient landmark, we had to stop the car to pay appropriate respect to what was a rattle in the ruins.  After watching him/her cross the road, it was clear that respect was due.  Getting out of the car, the first image is shown below stretched out long.

After clearing the road and moving several feet back into the grass, I got out of the car with my camera and took the first picture of this huge Diamondback Rattlesnake.  He/she appeared to be about four feet long, and was better than three inches in diameter at the greatest point.  He/she crawled onto a small rise about ten feet from the gravel road, stopped and coiled, and was carefully pointed back in the direction of the camera.  The second and third pictures of his crawl show the distinctive pattern on the back.

Finally the coil quite deliberately pointed back toward the camera and the intruder.  The head is shown directly over the rattles in this final, strike-ready position.  Never a rattle did I hear, but one may rest assured that such a sentinel is both fearsome and deadly.  If a rattle is a warning sign, the coil and strike ready position suggests otherwise.  Be wary!! 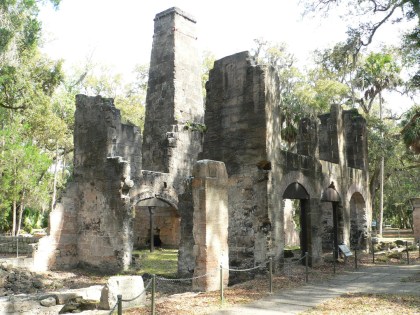 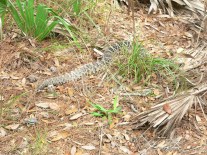 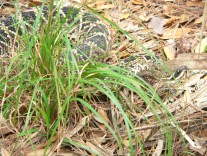 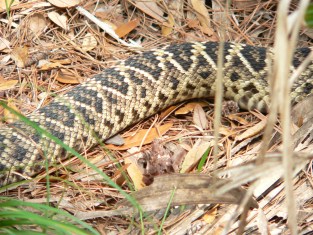 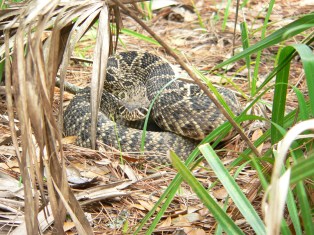 Coiled and ready, head over rattles