Exactly where today’s youth get their ideas for cool ways to dress is a mystery.  They must come from a peer group, the mall, rap lyrics, or MTV.  I know for certain they did not descend from their ancestors, none of whom would accept, much less tolerate their dress styles in public. Most ancestors would groan and roll over in their graves.

There are at least two quite distinct classes of stylish dress that may be seen, neither of which grandma would approve.  These styles are male and female.  The female style was described succinctly one day as I was walking through the mall.  Two young ladies were walking toward me, and as they passed one of them said:

“I just saw one of the cutest outfits.  It had a spaghetti string top and a short-ass skirt”.

As I am not totally current on the latest styles, I don’t know if short-ass is a marketing term, or part of the flavor added to this cute outfit by the young lady.

With that, they passed behind me to the rear, out of sight, but not out of mind.  The descriptive image of this cute style was indelibly etched into the gray matter.  This style scarcely covers the essentials, and leaves everything else for the world to see, like the tattooed butterfly emerging from the behind crack where clothes formerly hung. The girls don’t leave much of anything to the imagination.  It happened so quickly I didn’t have a chance to get their picture, but I already had a mental image of their older sister, Rojo, who blooms year round.  Is her style, like, cool, or what!!!  What a beautiful young lady with outrageous accessories!! 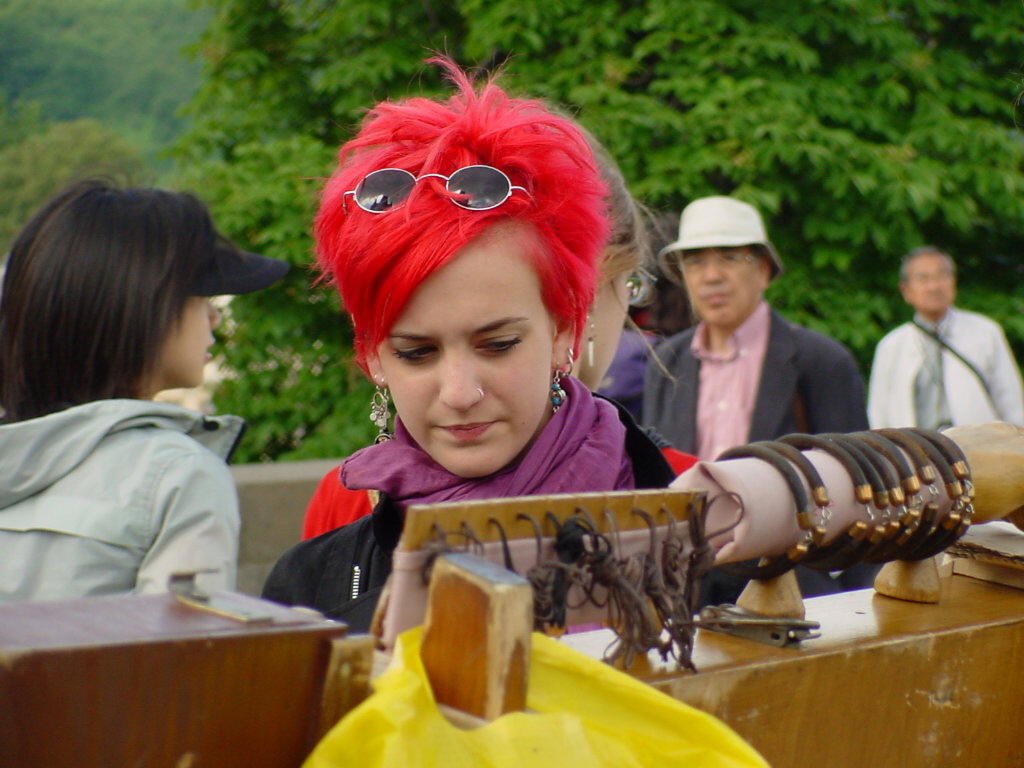 The male equivalent is not as easy to explain.  The most in your face style is the one often displayed by black adolescents and young adults.  Short trousers are totally not cool, even in hot weather.  This leaves only long trousers with legs of the proper length.  When worn in the stylish way, the pants’ legs gather around the bottom like Pete Maravich’s socks, and then drag along the earth like the skirt of a hovercraft.  This is the first sign that the style I am describing is staring you in the face.

It is definitely not stylish to have trousers that fit, nor even to own a belt or suspenders.  The proper trousers actually fit grandpa in his mature years when he was two hundred pounds overweight.  This identifies the key garment in the outfit.  Actually the preferred elevation for grandpa’s trousers is immediately below the behind, which for most people is just below the only structure capable of holding the pants up. Exactly who came up with this stylish elevation is a complete mystery.  In the navy worldwide, this elevation is called flying your colors at half mast. Most sailors would describe the elevation as half-assed.  Fact is, it is actually full-assed, as that is the part exposed above the waistline of grandpa’s trousers.

This outlines the beginning of a serious dilemma.  How, exactly, does one walk down the street or through the mall in grandpa’s trousers, with no belt and no suspenders, without losing your pants. To discover the answer, it is only necessary to apply empirical analysis, which means watch carefully.  Suddenly the answers rise to the top like cream.  Surprisingly, every answer I discovered was not only temporary, but momentary, requiring almost continual adaptation of some kind, much like the circus clown juggling bottles.

Everyone knows the Lord gave man two hands.  Most of the time the hands have nothing in particular to do, so they hang uselessly at the sides.  You can use one hand, or the other hand, or depending upon the size of grandpa’s trousers, you can use both hands to keep your pants from hitting the floor.  This very stylish dress gives your hands something to do if you have nothing better to do.  It is not really a solution, but it does keep idle hands almost fully occupied.  We have all heard that idle hands are the devil’s workshop. Grandpa’s trousers provide at least a partial solution to this problem, occupying at least one of the hands almost all of the time.

As I sat at the mall, three very tall and slender young black males are each seen wearing grandpa’s trousers.  One individual uses one hand all the time to hold up his pants, leaving the other hand free as a bird.  One individual must have had a particularly large grandpa, as he uses both hands most of the time just to hold his pants up.  Occasionally he gets tired of using both hands, so he tries to hold up both sides with only one hand.  This is very difficult with a big grandpa, so he grabs his trousers in the middle front and they fall precipitously in the rear.  He can use one hand in the front, and another in the rear, but this maneuver is quite awkward, appears funny, and leaves the trousers bagging on each side.  The two-handed grab, one hand on each side, seems to be the best single technique for holding up grandpa’s trousers.  The only problem with this happens when you want to do something besides hold your pants up.  Both hands are fully occupied, so this is not entirely a practical solution, unless, of course, standing around holding your pants up is all you really want to do all day long.

Later as I walked through the mall, I saw another young man, as usual, in grandpa’s trousers.  He was carrying a drink in one hand, and holding up grandpa’s trousers with the other.  This solution worked perfectly well till I noted his cell phone dangling from the waistband on the same side as the drink.  Now when the phone rings, the question I had is which hand he would use to answer the phone.  Will he use the hand holding the drink, or the hand on grandpa’s trousers.  With either hand, something has to give.   Had I known his number, I would have dialed it instantly to resolve my burning curiosity. As it was he continued walking through the mall, and the cell phone continued to dangle from the loop of grandpa’s trousers well below the drink.

Up to this point, we have dealt with only the trousers, which are the centerpiece of stylish dress, knowing that gravity in this case, is a relentless adversary.  Completing the wardrobe is not that difficult.  In public one must wear proper attire, so Calvin Klein style under-shorts are preferred over those parts which otherwise would be completely exposed.  On occasion the under-shorts are color coordinated to blend in with or contrast with the trousers, a choice apparently left to the person’s discretion, or lack thereof.

Such stylish dress, when practiced with a modicum of discretion, is bordering on rude in public, but is probably not illegal.  On a recent visit to Disney’s Wide World of Sports, as I walked among a crowd of mostly well dressed kids, there appeared one 12 year old black male. He was emulating his older brother’s outstanding style.  It included grandpa’s trousers, white knit undershorts, and a t-shirt.  He came walking directly toward me, and on arriving within a few feet, he raised his top well above his waist, thereby flashing his anatomy through his under-shorts, fully erect.  He was proud of his public flashing, at the same time I was appalled by such gross lack of decency in public in the presence of both young boys and girls.

My response was automatic.

“I see you are exposing your brain.  Your brain is not very large, is it?”

My next response was to find a security guard to enforce a minimum standard of decency that this youngster has not yet learned from his mama or his older brothers.

Finally there is a second dilemma which is yet to be resolved.  In polite society rules apply to public attire.  These young men are largely indifferent to such rules, preferring to flash their under-wear in other people’s faces for its shock value. Over the under-wear, the third stylish garment bears an incredible resemblance to grandma’s moo-moo, like those she often wore at the beach.  This final addition to decency adds both a stylish and an automatic measure of privacy through natural law.  Grandma’s moo-moo hangs like a circus tent from the shoulders, and responds perfectly to the force of gravity.  It provides complete compensation: when all else fails and the pants fall to the floor, the vitals are covered automatically by the moo-moo.

Grandma’s moo-moo actually allows a nefarious variation to enter such stylish attire.  With three garments specified, one of the three may actually be eliminated, and nobody would be the wiser.  While gravity covers everything quite nicely, it actually covers nothing at all.  Because of gravity, we can all be eternally grateful for Grandma’s moo-moo.  It provides a measure of social respectability for individuals who display a total lack of this quality.

When looking at such stylish dress from all perspectives, the male’s in your face style is actually a combination of grandpa’s trousers, and grandma’s moo-moo.  The result is a cross-dresser whose sex organs and brains are not just interchangeable.  The brain exists near the waistband of grandpa’s trousers.  Who would ever believe that such youthful and totally-in styles would bring back the garments that used to hang quite nicely on both grandparents.