Does Being Poor Matter in Education?

Research Summary:  Poor and Education   Education’s gaps in student performance have been around for decades.  When sorting students by race, ethnicity, national origin, gender, poverty, socio-economic status, urban-suburban-rural, intelligence, health status, and virtually any other demographic you can think of, the schools are simply unable to make students who learn equally.  The fury leveled at such inequality produces a widely held notion that it is the schools that are failing.  In no other field of human endeavor is an equal outcome expected, regardless of the sorting, except in education.  The gap is there, the gap has always been there, and the gap will remain there until the focus moves from irrelevant vested and political interests to those issues that influence individual student behavior.  Poverty is such an insignificant predictor of learning in school as to be irrelevant, but our politicians love to throw money at the problem.

Ravitch’s change of heart on school reform (WSJ Op Ed March 9, 2010) illustrates one of the greatest myths of professional educators:  That poverty is the explanation for students’ poor performance in the schools.  She states “the best predictor of low academic performance is poverty—not bad teachers.”  This myth is repeated as though it is the holy grail by letter writer Doug Augenthaler (WSJ letters March 13, 2010) who agrees that “there is no question that there is a correlation between poverty and student performance, but it is not easy to pinpoint the cause.”

Actually, a considerable body of evidence pinpoints many causes for doing well or badly in school.  Surprisingly poverty is such a minor cause that the Holy Grail turns into a holey grail, a widely accepted theory that should have been trashed years ago.  Poverty is the political solution to improving school performance.  Remove “poverty” by throwing money at education in impoverished areas, and this equalization through taxation will remedy the problem.  After five or six decades using this approach we arrive where we are today, nowhere!

Also surprisingly most teachers know exactly what contributes to doing well in school as well as its absence, doing badly in school.  This mystery is not buried within the dark recesses of poverty as defined by politicians in government.  The mystery comes alive and well when examining appropriate datasets and selected inputs with a thorough understanding of testing.  Ravitch applies a typical path of misunderstanding when she demonizes tests as contributing to the problem, rather than being part of the solution.  Tests are rarely used within the schools to analyze and correct deficiencies in teaching or student performance.  (See: Using Tests to Improve Instruction ) When used appropriately tests may be prescriptive of both problems and solutions for student learning.  When tests become the whipping boy, they are an easy target and are quickly filed away.  An Assistant Secretary of Education should know better.

Doing Well in School Versus Poverty

While at the University of Georgia in the Counselor Education Department for 27 years I was asked by personnel in the State Department of Education to analyze statewide population data using SAT results on all Georgia High School seniors.  I was given a data tape which included one year’s complete testing protocol and a free hand in analyzing the results for 33,077 high school students who took the SAT.  At the time the SAT was accepted for admission to all of the state’s colleges and universities.  While this population of students might represent a more ambitious portion of the state’s seniors, their performance overall includes both ends of the performance spectrum.

The SAT included a collection of 62 non-test questions designed to elicit information about each student’s background, family, and school experience.  From these questions 18 were selected for inclusion in the analysis because of known relationships with student performance from the literature. Race was one of these items which included seven different classifications.   Individual relationships and regression analysis was applied to each of the items with SAT combined scores.  The results were both revealing and startling, yet reinforce what almost every teacher already knows.

Because male and female students are known to inhabit quite different environments, they were analyzed separately.  This decision was fortuitous, and produced some interesting variants.  While Augenthaler states the connection between poverty and poor student performance is not easy to pinpoint, what he misses is that there may be little to no such connection at all.  This analysis, in fact, establishes the almost complete lack of any connection between poverty and student performance on the SAT.  This lack of connection is state-wide, across all races, in small towns and large cities, in small and large schools, and for both genders almost equally.

What the analysis did show was a pattern of primary factors which are related both positively and negatively to doing well in school.  The primary male relationships with student performance are shown below through individually calculated F-values, levels of common variance. 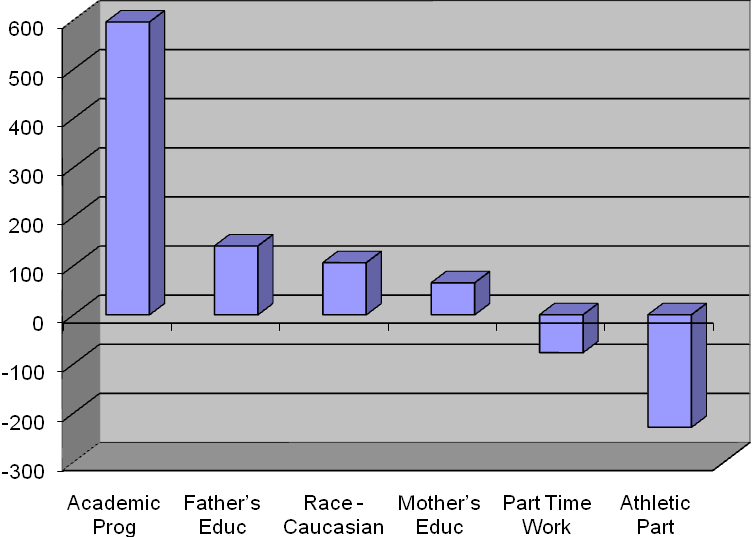 The primary explanation for students doing well in school is participating in the academic program.  This is a programmatic choice within most high schools.  It explains doing well on the SAT.  It indicates beyond question that those students who value an education and choose to participate in the best a school has to offer actually do far better than their peers within the same schools who do not make this same choice.  School choice, in this context, places responsibility for doing well within each student, and removes the convenient excuse that one attended a “failing school”.   Among the variables entered for males, family income was next to last in significance as a predictor of student performance.

Of somewhat lesser importance, but far more salient than income, was the educational levels of both the father and the mother in the student’s home.  The father’s educational level was the second most important positive factor contributing to the success of male students in school.  Unfortunately a large proportion of black students have no father in the family home, effectively removing the contribution of this positive factor.  Part time work and participation in athletic programs were both negative contributors to success in schoolwork.  These negative predictors are also choices made by individual students.  As cruel as it may seem, there are only 24 hours in a day, and choosing to shoot hoops rather than to study has a down side on school performance. 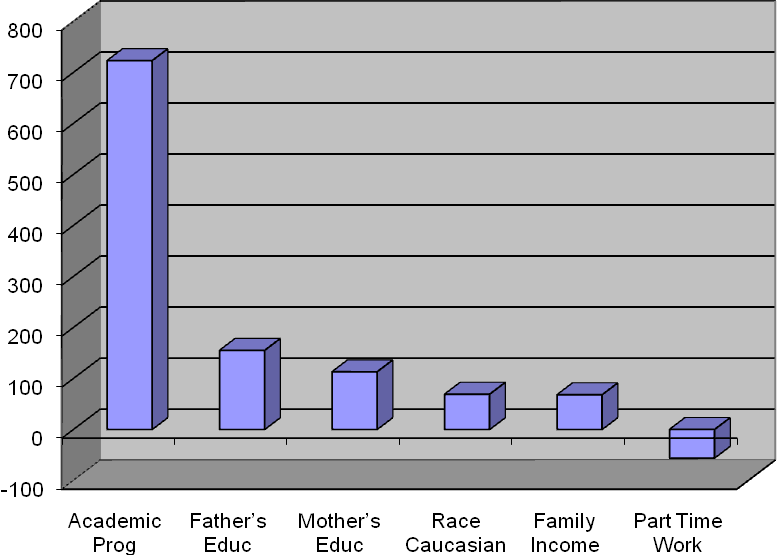 Like the male results, the female values show an almost identical pattern as the males.  Choosing to participate in each school’s academic program is head and shoulders the most important factor contributing to doing well for female students.  Again both the father’s and mother’s educational levels contribute to their daughters’ doing well in school.  Only within the female regression did family income become one of the top six predictors.  Family income adds a minor positive dimension to school performance for female students.  Undoubtedly the members of this class can explain this minor league player adequately.

Education’s gaps in student performance have been around for decades.  When sorting students by race, ethnicity, national origin, gender, poverty, socio-economic status, urban-suburban-rural, intelligence, health status, and virtually any other demographic you can think of, the schools are simply unable to make students who learn equally.  The fury leveled at such inequality produces a widely held notion that it is the schools that are failing.  In no other field of human endeavor is an equal outcome expected, regardless of the sorting, except in education.  The gap is there, the gap has always been there, and the gap will remain there until the focus moves from irrelevant vested and political interests to those issues that influence individual student behavior.

Most educators and most parents know good students when they see them.  Good students enjoy most schoolwork, enjoy their classmates, and look forward to going to school most of the time.  They attend class regularly, pay attention to the teacher, do their homework assignments, obey the school’s rules, and generally are interested in doing well in all their subjects.  They are obedient, disciplined, responsive, accepting of authority, and have no interest in making waves or causing trouble.  Their parents support the schools’ programs and activities.