Redneck Girl with Parrot and Gun

This redneck girl dint jus appear out of thin air, but was the proud progeny of some for-real gun-totin folks from out west.  With roots in Kansas as deep as they go, she had two older brothers who done their best to train her right.  She jus never seemed to catch on till she moved to New Jersey and married a dark-skinned Italian from Bound Brook.

It seems her pa got caught up in the gun-buying frenzy when the gov’ment decided they was gonna restrict gun-buying to proteck yoself an yo stuff.  When her ma came into a few bucks from a departed sister, her pa decided it was time to turn his two B-B guns in for a real pistol.  On the advice of a neffew in the mountains of Colorado, her pa bought a Springfield 9-mm pistol to replace them B-B guns.  Then he made the mistake of announcin his purchase to his redneck daughter in New Jersey, who married that Italian.

That Italian son-in-law done wondered why anybody really needed any guns at all.  In the commotion, he discovered that his two brothers-in-laws had married into equally redneck wommens, one from Jackson County, Georgia, and another from Jacksonville, FL who fessed up that she carried a 38 revolver in her purse.  Feeling left out, this redneck girl, who married the Italian in New Jersey, rote the following note jus to keep her redneck reputation pure.  The following is what this redneck girl done wrote:

“Well, I guess I oughta go up the road a short stone’s throw to the new gun shop that jus opened up there now.  It is less than a half mile from my house.  It has a shootin range behind it too.  I can jus buy me a handgun an fit right in here with my gun totin redneck siblings and their weapon savvy wives. An jus after I get me a gun thar I can mosey on back to the east a short ways and visit the tattoo parlor that’s dun opened up there. And I can get me a tattoo of my new gun right on my forearm.  And then I imagine I best find a safe hiddin place fer it from my husband and kids.  I reckon my husband says he don’t need a gun cause he keeps a baseball bat under his side of the bed and lil Vince keeps a fryin pan under his bed…a big fryin pan so he don’t need any compensation for his fryin pan either. Baseball bats and fryin pans can kill people.   But i spect a gun kills em more quicker and from further away.

An after I figure out where’s to hide my gun I best write a note to myself reminding me where I dun hid my gun else I’ll forget.  Then, next time me and the Italian, who says he don’t need a gun, next time we gets to goin at it about summin and he makes me mad, ima gunna see if I can remember where I put the note about where I done hid my new gun and ima gunna get my gun out and tell him ima gunna shot his Italian ass ifin he keeps on makin me mad.  And then ima gunna tell the police that he didn’t keep them bird feeders on our deck filled, and that them cardinals out there were getting more and more mad, and that one day, they jus showed up and got my gun, which my note says I had hid in that tree there, and they shot my Italian husband right in his ass, yep, that’s what happened, and ima gunna tell them it is an ole family issue from my brothers wife’s daddy that dun made those red birds into angry birds.   So, ima thinking that the best thing to come from these gun totin family members is a real understanding of what angry birds really are bout.

Here is a picture almost as good as my ole sister in law that my brother, the mountain man, dun married over 26 years ago.  Heck, he knows better than to be ugly to her, she might hurt him too, with her daddy’s gun! 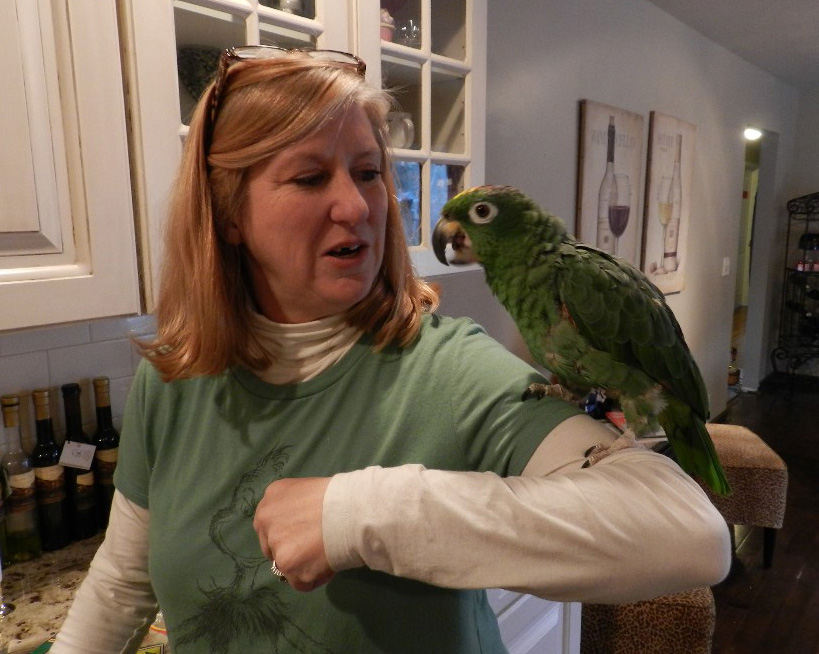 One Response to Redneck Girl with Parrot and Gun