Paper Summary: The erosion of household wealth is a clone of our collective governments’ debt over the past 25 years. Until the growth of debt is reversed by governments and families alike, the American Dream will go down in flames. What is lacking is the serious management of debt across the country. The government is not the solution, but is leading the way into the abyss.

Two outstanding long-term PEW research studies on income and wealth in America clearly establish complete income mobility of offspring from the poorest of families. Generating wealth is a horse of a different color as younger families try to convert their greater incomes into wealth through the uncontrolled use of debt. Our governments have been trying to do this for years. Not surprisingly, journalists are incapable of understanding the research and separating the findings from political spin.

According to many on the left, journalists and politicians alike, the American Dream is more illusion than real. The rags-to-riches story is more often found in Hollywood than in reality, according to Allison Linn of MSNBC’s Economy Watch. Marisol Bello’s Money Section report in USA Today asks; Are you upwardly mobile? Not likely. President Obama would have us believe the middle class is disappearing while the evil rich are not paying their fair share. Really!!

The above political spin may be taken from the Pew Charitable Trust’s Economic Mobility Project entitled Pursuing the American Dream: Economic Mobility Across Generations. This is an outstanding 40-year study of American families initiated in 1968 and continued through 2009. Comparisons are presented of parent and offspring income earned at the same ages adjusted for family size and inflation.

The study’s basic findings come in two formats, 1) dollar for dollar reported income, and 2) the same income classified in five income quintiles for parents and their offspring. Most everybody understands the dollar for dollar comparisons. The quintile, five-step ladder, leads to slippery misinterpretations, like the rags to riches Hollywood fiction line. An offspring may make more income, dollar for dollar, than his parents. However, if he can’t reach the next rung of the ladder, the next 20% quintile, he remains on the same rung.

Given this statistical anomaly, an objective picture of income mobility emerges which is unusual, unexpected, and readily misinterpreted. Overall, dollar for dollar, 84% of the offspring made more income than their parents. This is highly significant, and the pattern is for those from lower earning parents to improve more (93%) than those from higher earning parents (70%). This interpretation is the first to be distorted by those with a political axe to grind.  Converting all dollar-for-dollar incomes into quintiles, a complete display of PEW’s income mobility is shown in Table 1.

Table 1
Income mobility of offspring compared with family of origin 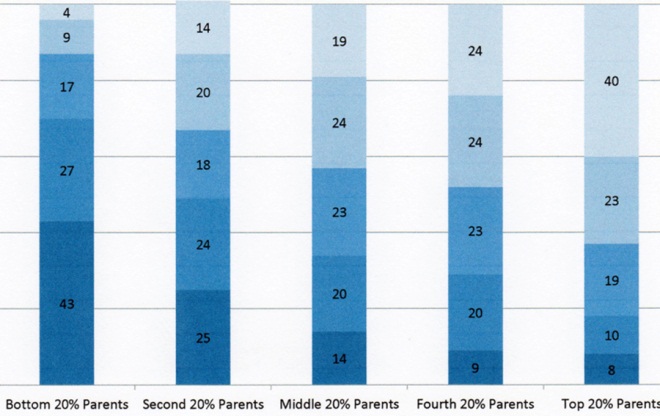 Each column from left to right in Table 1 shows the original family’s income level sorted by quintile in 1968. The bottom 20% parent income earners are shown in the left column, and the top 20% parent income earners are in the right column. Within each column is shown the distribution of their offspring income quintile at the same age 40 years later. This is a visual display of income mobility comparing two generations. The parents are fixed left to right, low to high. The offspring are distributed within each column using the equivalent income quintiles 40 years later.

It is this contradictory pattern that both intrigues and allows perverse interpretations. Surprisingly, Pew’s own writer focuses upon the lower left 43% of low income offspring as being likely stuck there. To the contrary, the most likely outcome is the 57% who moved to all four of the higher rungs of the income ladder in a single generation. Few journalists mentioned that the offspring of high earning parents moved to lower income levels. Strange!!

Contrary to Pew’s own characterization of being stuck in a category, there is significant income mobility across all American family income levels based upon this study. It is clear from the data that the offspring of parents in the 1960’s and 70’s, regardless of their parents’ income level, have full mobility from bottom to top and top to bottom of America’s income ladder through 2009.

What is not identified in this study is the arduous and life-long process of converting annual income into household wealth. Addressing this process, PEW reported a 25-year census study on household wealth and age through 2009 which included mostly apples to oranges comparisons. The primary findings are shown in Table 2.

Over this 25-year period, the net increase in median net worth was only 10%, not a particularly impressive growth in wealth. What is impressive is the same-age loss of wealth among the younger households, and the increase in wealth among the older households. This comparison makes sense only if one understands the factors which caused the differences. Yet the income study above shows the younger folks made significantly more income than their parents. A gremlin is clearly hiding in the data.

All inferences taken from this table are based upon ten different household groups which vary in age across the 25-year period from 10 to 90 years of age. The most nearly comparable information is shown in the change column. Table 3 is a picture of this dramatic change in wealth by household age.

Such dramatic and consistent results suggest a single factor at work which influenced the older groups less and the younger groups more. While there are undoubtedly many factors in play, this single factor is so powerful that it must be considered the dog that wags the tail. This single factor is the increased use of debt, also known as credit within the national economy.

As a general rule income is not converted to wealth through debt. Over 5, 20, or 50 years the cost of credit is a relentless drain upon household finances. A young family may depend heavily upon credit to cover the exorbitant costs involved in raising children and paying its bills. Unless this demon is recognized and managed prudently, young family finances may spiral out of control.

Staying above water financially by young families is accomplished more easily when there are two income earners in a household. At the younger household stages the prudent management of credit and the eventual elimination of most debt is the key to the subsequent growth of household wealth.

Over the past few decades the primary pattern of family households is the increased divorce rate, more households with single parents, taking on mortgages with little or no down payment, and making minimum payments on credit card debt. The more recent purchase of new and used homes by individuals with little or no initial equity in those homes is the most recent bubble to erode the net worth of all families. These are the recurrent financial burdens young families face that reduce, delay, or prevent the growth of household wealth.

The PEW report on household wealth is a revelation through what it does not say. The youngest households’ net worth is less than a third of what their age-equivalent peers had 25 years earlier. The three youngest groups each had less net worth than their earlier peers. Increasingly what evolved was the increased use of credit, also known as debt, as the means to grow wealth. As debt increases, as it clearly did, household net worth is decreased by an equal or greater amount.

Making only the minimum payment on credit card debt pays off this debt in 22 years, provided no additional charges are added. Virtually all of the payments go toward interest on the debt in the same way that most mortgage payments on a home go to pay interest. It is only the prudent management of debt that allows net worth to grow from negative to positive numbers. Over this 25 year period, the younger households have not learned this lesson, and most are managing their debt into the poor house.

To report a statistical ratio, 47 times, as a meaningful gap in the growth of household wealth does a serious disservice to the opportunity to get ahead in America. Over this 25-year period, with the income of offspring significantly greater than their parents, it is the growth of debt that multiplied the gap in wealth. As ratios like household wealth go, the lower figure, the denominator, is the terminator of wealth. A clearer picture of this negative influence on household net worth is not possible.

It is equally clear that our federal and most state and local governments have been growing debt in exactly the same way. The vast majority of America’s debt is not even on display, as our governments exempt themselves from reporting retirement debt obligations into the future. Debt coming due in the future is ignored at ones peril.

Our federal, many state, and multiple county and city governments are mismanaging debt by refusing to balance their revenue with their annual expenditures. Long term debt, primarily retirement, is routinely kept out of sight. The future has now caught up with us, and many American cities are declaring bankruptcy to liquidate the debt they have been ignoring for years.

The erosion of household wealth is a clone of our collective governments’ debt over the past 25 years. Until the growth of debt is reversed by governments and families alike, the American Dream will go down in flames. What is lacking is the serious management of debt across the country. The government is not the solution, but is leading the way into the abyss.